Both kinds are capable of moving a great deal of snow, but they do so in somewhat different ways. Knowing how they differ can help you determine which style is right for your snow removal needs.

Choosing a snow blower based on the size of the job, the shape and pitch of the surface that needs clearing, and your experience level should lead you to a style that meets your requirements. 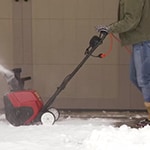 If your driveway's over 50 feet long, you'll likely have trouble clearing it with an electric model. Using an electric snow blower in excess of 50 feet from the power source will require a 12-gauge extension cord to avoid electrical hazards. However, if you properly size and gauge your extension cord, overheating shouldn't be a real concern.

More recently, battery-powered technology has been improving, leading to longer use times and heavier applications. However, even with fewer limitations each new season, gas snow blowers have unique benefits that can't be matched by any electric or cordless snow blowers.

Gas snow blowers are ideal for longer driveways and bigger jobs. They're limited only by the size of their gas tank. If you're clearing a long driveway, clearing sidewalks, or working anywhere that doesn't have access to an available electric outlet, then a gas snow blower is the way to go. 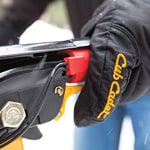 A common misconception about snow blowers is that the smaller models are easier to move around. Though single-stage and electric snow blowers are small and light-weight, they're not always easier to maneuver because some models are too light to grip the pavement the way they should.

The heavier weights of two-stage and three-stage snow blowers actually work in their favor by always having solid contact with the ground and grip on the wheels. These snow blowers are typically self-propelled, and many can even be found with power steering. These snowblower features mean you can easily move and steer your snowblower by simply operating some levers.

Tracked 2-stage and 3-stage snow blowers will have the most traction because they move like a tank but usually will come at the cost of having less maneuverability than wheeled models. However, some track-drive snowblowers allow you to switch from tracks to wheels, making them more versatile and safer than wheeled models. 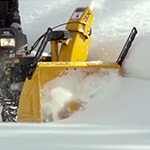 Gas-powered snow blowers pack some serious power for moving some serious snow. City plow piles at the ends of driveways are going to be too much for an electric model, but a cakewalk for a three-stage snowblower. 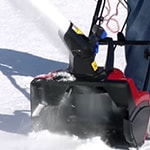 Electric snow blowers have a maximum clearing width of 24 inches, with a maximum intake height of 13 inches. If you're trying to clear more than a foot of snow, it's going to be difficult to do, and results won't be great.

Gas-powered snow blowers have a maximum clearing width of 45 inches, with a maximum intake of 23.5", so they're able to clear an area nearly twice as fast as the widest electric model, and can handle snow up to 45 inches deep, including the iced-over snowbanks at the end of the driveway.

A lot of people think electric snow blowers are the way to go for easy start-up and no pull-cord. What you may not realize is that many of the large gas-powered snowblowers feature electric start as well.

Even in the event that you can't plug into an outlet for the electric start feature, most new gas-powered models start with one or two pulls of the cord. Plus, most pull cords are easier to pull now than they were years ago.

Many times, you'll hear people say it's easier to pull start their snowblower than it is to plug in and push the button. So push-button start-up is something you can get on both electric and gas models, but shouldn't be a deciding factor in choosing a snowblower. 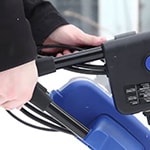 While gas models have their many perks, electric units have some of their own. Electric snow blowers don't need oil changes, they don't need new spark plugs, and they don't require gasoline. The only real maintenance they require is wiping down any part that gets especially dirty or salty and recharging the batteries for dc models.

Electric snow blowers top out at around $850, making them a less expensive option for the best electrics around. If you have a small property that doesn't see a lot of snow, and your electricity rates are low, an electric model may be a good fit for you.

Gas-powered snow blowers cost anywhere from $360 - $3,600. The large price range is the result of the many different styles, sizes, and feature options you find only in gas-powered models. Some can be as small as an electric model, or very large, heavy machines.

NEXT: How to Pick the Perfect Snow Thrower
Related Articles

Why to Choose Snow Blower Features Over Size & Power

How to Pick the Perfect Snow Thrower
Hide